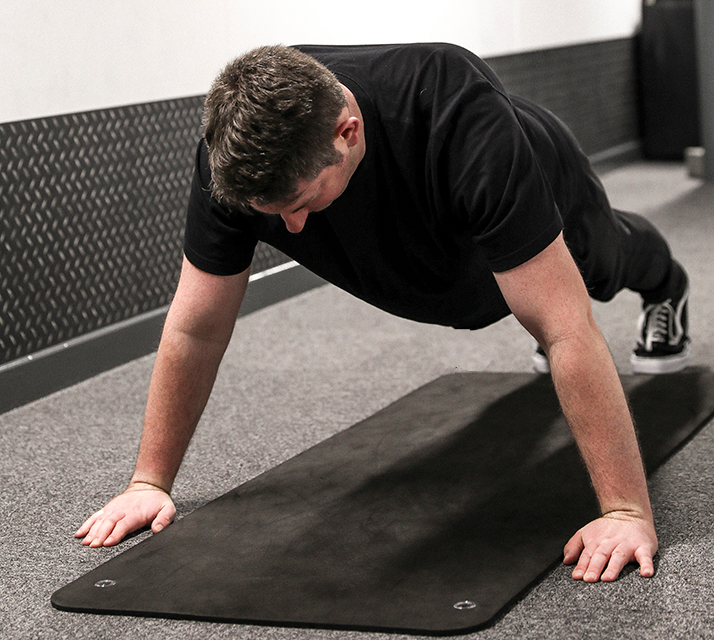 The Basics: The Push Up

The number of times I hear excuses for not being able to do them is high, but that inability largely boils down to two aspects; not being strong enough to move your body weight, or having unstable shoulders.

So let’s unpack these a little. In the first instance your problem could be one of strength, or it could be one of total mass. Typically women weigh less than men, but men are far more likely to execute push ups than women. Why? Well there is a genetic component at play here, men typically have more upper body muscle mass than women, so that gives them a higher proportion of their strength in the upper body. Typically, therefore, men have a strength advantage in the push up.

Equally, women carry roughly ten percent more body fat than men. A man of 15% bodyfat is on the way to being lean, but not cut. A 15% body fat woman is very lean and cut. Therefore even though they weigh less a higher percentage of a woman’s body is bodyfat, and not beneficial to helping with a push up.

These problems can affect men too. They can be overweight and lack the strength to do a push up, but it’s far more common to see women struggle with them for these reasons.

Let’s now turn our attention to shoulder stability. Unstable shoulders are becoming increasingly common due to lifestyle and work, because we are in increasingly anterior positions.

From a push up perspective this means the bottom half of the movement becomes a real challenge, because the bottom half is where the pectorals become the prime movers, which require your rotator cuffs to be healthy and strong.  Posture becomes a factor too.  If your postural positioning is poor you will have a natural tendency to bring your shoulders and head forwards.  Compensations as a result of this are common.  People internally rotate their shoulders (turning their hands inwards) in order to find a stronger position.  The result of this is that they run out of depth and don’t work their rotator cuff muscles fully in the movement.  This creates a circular problem; weak rotators contributes to poor posture, poor posture leads to doing push ups with your shoulders in internal rotation, internally rotated shoulders leads to a lack of range, a lack of range causes weak rotators.  It is for this reason that a good full range push up can be considered as beneficial for your posture, even though it is working the chest.

So what practical steps can you make to improve your push up?

The most important thing you can do is aim to work in full range with a load you can handle.  If that means you need to work off the knees or change the angle of your push up to a higher and less demanding position then so be it.  Head position is also vital.  Maintaining a neutral head position, and not allowing it to dip, will strengthen the spinal line, ultimately benefitting your posture.  Equally, engaging your core and glutes in the movement further improve your execution of the movement.

Don’t be afraid to regress out of push ups altogether if they are challenging and work on exercises that strengthen the triceps and core, or those that improve the stability of the rotator cuffs if needed.